And there you have it. The end of the 2020-2021 NFL season and unsurprisingly another Super Bowl victory for Tom Brady. The guy is an absolute winner. I’m not going to touch to much on this game other than offering my congratulations, because I plan on doing a separate article on how insane Tom Brady’s stats are.

NBA: Sixers at Trailblazers
The 76ers are establishing themselves early as one of the top teams in the Eastern Conference. Joel Embiid is playing MVP-level basketball, and new Sixer Seth Curry is having one of the most efficient seasons possible from a guard. My complaint about the Sixers over the years has been about Ben Simmons inability to adapt to defensive schemes in the playoffs, but this year with Curry as another guard option I think the Sixers have a real chance to make a deep playoff run and possibly come out of the East. Across the country, you have the Portland Trailblazers. Damian Lillard is easily one of my favorite players in the NBA. The guy has an unreal clutch factor, which he’s been showing off as of late by hitting deep, game-clinching threes. He and Embiid are two of the top scorers in the NBA, and Dame and Curry are two of the most prolific three-point shooters. I would definitely expect some offense in this game. I give the edge to the Sixers as the better team, but the Blazers are a solid team as well and are at home, so it could definitely go either way. Check this one out Thursday at 10:00 pm on TNT.

NHL: Sharks at Kings
Wait a minute, is Influential Gentleman really picking a game of the week matchup between two of the worst teams in the NHL? Yes we are. It’s not just because I’m a life-long Sharks fan (literally life-long as they were “born” the same year as me and I went to a game as an infant in their inaugural season). These two teams are falling behind in the West and do not want to drift into obscurity early. Apart from that, this is a solid hockey rivalry. Due to these two reasons, I anticipate a scrappy and hard-fought game from start to finish, both teams trying their hardest to remain relevant for another week. After the Sharks definitely win get ready for their comeback to the top of the league. Ok that was because of my fanhood, but I need to believe in something right now. Tune in to Sharks vs Kings Tuesday at 10:00 pm.

Premier League: Liverpool at Leicester
There are some solid matchups this weekend (looking at you, Manchester City vs Tottenham), but this one is without a doubt my pick of the week. Leicester plays some of the prettiest soccer in the premier league, and despite not being made up of a team of household names, currently sit at third in the premier league, 2 points behind Manchester United and 3 points above Liverpool. You all know how much I love Jamie Vardy. And you should also know that Vardy loves to score against the best teams in the league. He’ll be pounding his Redbull in preparation and ready to run Liverpool’s defenders ragged for 90 minutes. Liverpool are slowly falling behind in the Premier League. They just had a humiliating loss to Manchester City, during which their goalkeeper, Alisson, had arguably the worst performance of any goalkeeper in the last 5 years. They’ll definitely want to rebound strongly against Leicester. My heart says Leicester but my gut tells me Liverpool. We will see which is right at 7:30 am on Saturday, February 13th.

Netflix Movie of the Week: The Outlaw King
I’m a big fan of The Outlaw King for plenty of reasons. I think Chris Pine is awesome. He’s the star of the revamped Star Trek films, and of course in plenty of other movies like Wonder Woman, Horrible Bosses 2, and Jack Ryan: Shadow Recruit. He always delivers a strong performance and this is no exception. The movie is also based off a true story from a very cool time period. Pine plays Robert Bruce, the Earl of Carrick, who leads a completely outnumbered and outmatched Scottish army against the occupying English forces. Cool accents, awesome true story, and solid acting. If you like actions movies and/or history you should 100% give this one a go. Let me know if you check it out and tell me what you think!

Entertainment of the Week: February 5th to 11th

NFL Game of the Week: E-A-G-L-E-S, EAGLES! There is no NFL game this week. However, I wanted to use the…

Entertainment of the Week: January 29th to February 4th

NFL Game of the Week: Superbowl LII, Eagles vs Patriots No surprises here. The team of destiny vs the team…

NBA: Warriors at Lakers A few years back it was expected to see Stephen Curry vs Lebron James in the…

Entertainment of the Week: February 15th to 21st

NBA: Nets at Suns I legitimately did a double take when I read the current record of the Suns, considering…

Entertainment of the Week: March 5th to 11th

NBA Game of the Week: Rockets at Thunder The Rockets are currently the best team in the NBA, which is…

NFL Game of the Week: Eagles at Saints Nick Foles, enough said. But I’ll say more. Foles is at the…

NFL Game of the Week: Pro Bowl I almost want to find any other football game on in any part…

Entertainment of the Week: May 7th – 13th

NBA Game of the Week: Celtics at Sixers If you’re from Philadelphia, you’re clearly disappointed and probably a bit dumbfounded…

NFL Game of the Week: Ravens at Chiefs We all know what to expect from the Chiefs. They’re going to…

Entertainment of the Week: May 28th – June 3rd

NBA Games of the Week: Cavaliers and Warriors Well it’s the last week in May which means it’s time for…

NFL Game of the Week: Steelers at Ravens The Pittsburgh Baltimore matchup is one of the best rivalries in football….

NBA: Hornets at Lakers The Hornets are my “fun to watch” team of 2021. Lamelo Ball is shattering expectations and… 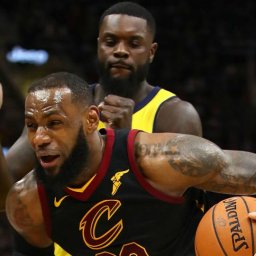 NBA Game of the Week: Pacers at Cavaliers (Game 2) Since NBA playoffs have arrived there are a ton of…